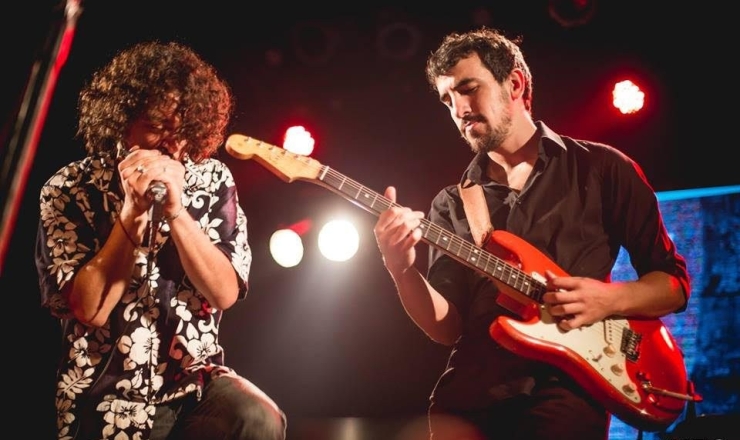 Federico Verteramo, guitarist and singer and Jorge Costales, harmonicist and singer are two of the most popular argentinian Blues musicians. They have played in more than 15 countries and released albums in recent years.

In 2020 will be having placed the first Japan tour involving Federico Verteramo & Jorge Costales. They will be showing their new album recorded called #europabluestour.

This badge comes as a result of the previous tours made by them in 2017 and 2018, where they had the chance to participate in important festivals and concert rooms in countries such as Netherlands, France, Austria, Spain, Hungary and Germany.

The new album, besides their own repertoire, gathers the participation of some of the most recognized musicians in Europe like Jörg Danielsen (Austria), Quique Gomez (Spain), Bone Tee (France), amongst others. This album is a vivid translation of their experience as a band and their bond to the european country and its Blues whereabouts.

Federico Verteramo and Jorge Costales constitute one of the most active Blues projects in South America nowadays.

Locally from Buenos Aires, Argentina, they have blended in many occasions, offering shows with a wide range of blues traditional styles. While Federico leans toward the classic blues sounds, specially «Chicago Blues«, Costales provides rhythms like boogie woogie, jump blues and swing to the repertoire, identified like the “West Coast” from California.

They have made near two hundred presentations since 2015, when they first started working together, including participations in important festivals like “Vienna Blues Spring” (Austria), “Mississippi Delta Blues Festival” (Brazil), “Keep the blues Alive” (Uruguay) and “Buenos Aires Blues Festival” (Argentina).

Simultaneously, the project has also served as the local band that partnered up with international musicians that have toured Argentina, such as Dylan Bishop (USA), Jorg Danielsen (Austria) and Quique Gomez (Spain).

On the other hand, they’ve also played together and separately with huge artists of the genre including Tail Dragger (USA), Dave Riley (USA), Lurrie Bell (USA), amongst others.

In 2016 Jorge Costales released «Shock Instrumental», his first solo album that proposes a firm travel through California Blues and that has received excellent criticism among different media.

Considering discography material, in 2017 Federico presented their last album called Verteramo Trío which, with a powerfull sound, tried to imitate the impact that the band achieves in live performances. They recorded not only blues covers, but also originals.

Jorge is endorser of harmonicas of the German Seydel brand, one of the most important manufacturers in the world: Click here for more info.